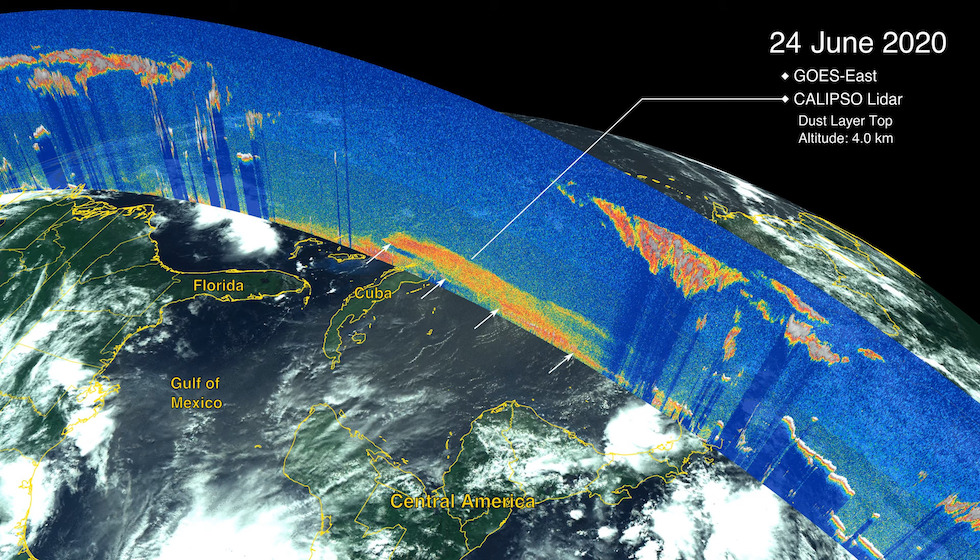 CALIPSO view of Godzilla on June 24, 2020 as it passes over Cuba

A space-based laser that measures clouds and small atmospheric particles has provided a unique view of the massive Saharan dust plume that crossed the North Atlantic Ocean in June. The Cloud-Aerosol Lidar and Infrared Pathfinder Satellite Observations (CALIPSO) satellite — a joint venture between NASA and the French space agency, Centre National d'Etudes Spatiales (CNES) — observed the plume as it traveled across the ocean and eventually affected the mainland of the United States. Though long range Saharan dust events occur every summer, the unusually large quantity of dust remaining after this plume's trans-Atlantic voyage earned it the nickname “Godzilla.” The plume swept out from the west coast of Africa over the Atlantic Ocean on June 17, 2020. Within days it extended across the Atlantic, degrading air quality and lowering visibility in the Caribbean. It reached the southeastern United States on June 25, resulting in an air pollution event lasting several days that saw the U.S. Environmental Protection Agency’s (EPA) air quality index (AQI) reach orange (unhealthy for sensitive groups) from the Florida panhandle all the way to Kansas. The animation here includes images and data from instruments on board the CALIPSO and the National Oceanic and Atmospheric Administration (NOAA) GOES-East satellites, which observed the event unfold in great detail June 18-27. The animation visualizes true-color photographs from the GOES-East imager beneath vertical profiles of measurements acquired from CALIPSO's lidar several hours earlier. Together, they show the impressive extent of the dust plume across the ocean and into the atmosphere. Access CALIPSO Data and Information
View the complete article and animation from the Related URL below: