Our atmosphere is a chemical soup that is constantly sampled by orbiting Earth observing satellites.
Dr. Emily Fischer uses these data to better understand how pollutants move in the lower atmosphere. 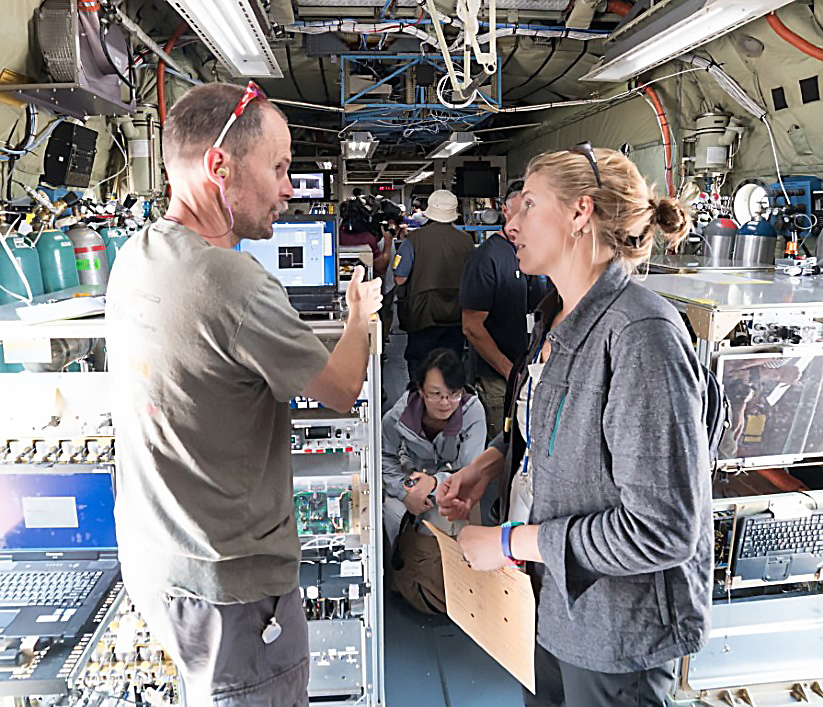 Dr. Fischer (right) confers with Dr. Frank Flocke prior to a flight of the NSF/NCAR C-130 research aircraft

Research highlights:     Ozone (written chemically as “O3” to designate that it is made up of three oxygen atoms) is a pretty amazing molecule. It is highly reactive, which means it easily can be broken into components of individual molecules of atomic oxygen (O) or into molecular oxygen (O2) and then re-combine back into ozone (O3). This molecular breaking and re-combining is caused primarily by ultraviolet (UV) radiation from the Sun, and is rapidly and constantly occurring in a layer of the atmosphere called the stratosphere, which extends from about 10 to 50 km above Earth’s surface. Through this process, most of the Sun’s harmful UV radiation is absorbed and prevented from reaching lower levels of the atmosphere (check out the frightening results of a NASA model simulation predicting what could happen if Earth’s stratospheric ozone were depleted). Fortunately for life on Earth, 90 percent of atmospheric ozone is in the stratosphere.

The remaining 10 percent of Earth’s ozone resides in the lowest layer of the atmosphere, called the troposphere, which extends from the surface to about 10 km. This is where the whole breaking and recombining of ozone molecules becomes more complex—and more interesting for researchers like Dr. Emily Fischer. Using satellite-derived Earth observing data from NASA’s Earth Observing System Data and Information System (EOSDIS) collection combined with model data and data acquired through field investigations and aircraft-borne instruments, Dr. Fischer and her colleagues are exploring how a trace gas called peroxyacetyl nitrate (commonly known as “PAN”) impacts the distribution of ozone in the troposphere.

In the lower atmosphere, PAN and ozone are two important pollutants, particularly in and around urban areas. Both are poisonous to plants in high concentrations, and both can affect human health. PAN is a strong eye and respiratory irritant, and ground-level ozone can cause a wide range of respiratory issues. As noted by the U.S. Environmental Protection Agency (EPA), “long-term exposure to [low-level] ozone is linked to aggravation of asthma, and is likely to be one of many causes of asthma development. Long-term exposures to higher concentrations of ozone may also be linked to permanent lung damage.”

Much of the satellite data used by Dr. Fischer in her PAN research were acquired by the Tropospheric Emission Spectrometer (TES) instrument aboard NASA’s multi-national Aura satellite. Launched in 2004, Aura’s mission is to acquire measurements of ozone, aerosols, and key gases throughout the atmosphere.

TES collected data between 2004 and its decommissioning in 2018 due to a part failure. Routine standard data products from TES include vertically-resolved profiles for atmospheric ozone (O3), carbon monoxide (CO), water vapor (H2O), and methane (CH4). TES data are also turned into specially processed data products, including atmospheric profiles of ammonia (NH3) and PAN.

TES data are available through NASA’s Atmospheric Science Data Center (ASDC), which is the EOSDIS Distributed Active Archive Center (DAAC) responsible for EOSDIS data related to Earth’s radiation budget, clouds, aerosols, and tropospheric composition. As noted by Dr. Fischer in a NASA news release about the TES decommissioning, “TES really paved the way in our global understanding of both PAN and [ammonia], two keystone species in the atmospheric nitrogen cycle.”